The “WGT” is the world’s largest goth festival and it will remain obnoxiously good with unique atmosphere of the locations, a range of concerts and performers plus thousands of visitors. A major gothic Sub Cultural event and tribe gathering – and in pictures they partied forever.
So the question is, as every year – how was this one?


Agra is a jewel of industrial architecture of DDR and is the ideal venue for, and the main centre of, contemporary WGT event.
The first news that appeared at the beginning of 2015 was that the Agra area would become a new residential district with high density housing projects, hotel, kindergarten and retail services. I have been advocating for years that WGT should employ at least one urban planner as part of its organization, to deal with all that locations vs sub-subcultures and now real estate market pressure (c wgt txt 2014 link) The Agra facilities and big market hall would be demolished and WGT would lose it main location.
It is clear that the growing city of Leipzig (?) needs space for residential development. However, the presented plan is conflicting with the current use of Agra as a meeting place and camping grounds, which likewise contributes to the development of the city. Professional critics pointed out that broad participatory process was excluded and hence contrary to contemporary planning practices.

The Goth scene and some politicians pointed out that this kind of development could put an end to the WGT. One of the visitors said (JL): ”Well, either the city council provides a suitable alternative location or they just killed the WGT... How stupid can they be?!”
Is this possible on the 40-hectare Leipzig part of the Agra-site? The last news was that the plans as presented were cancelled, and that municipality of Leipzig ordered new concept and development program for the area of Agra that would include different interests of stakeholders, including WGT as one of the motors of city economy.
In my opinion, it is questionable whether new locations would end the WGT, or begin a new era. For instance Congress Center Leipzig is on the same driving distance as Agra (8.3 km) from the Main Station, but it is located in the north of the city.  Architecturally, this would be interesting as it is Europe's largest full glass hall and reminiscent of the magnificent crystal palaces of the 19th century. It is an open question would that location be too expensive for an organization of gothic festival as well as how would this venue influence the dynamic of the WGT in connection with other locations, and visitor preferences and habits.


A newly designed official web portal for the WGT, in more languages, and a mobile app WGT Guide (useful if you have internet abroad, otherwise -wLan) is a new plus for user-friendly organization.
For any more contemporary (social) media search there is already #WGTLeipzig and # WaveGotikTreffen . WGT as the biggest Goth social event, became also major event at social media - so you can follow different Goth bloggers and YouTubers  (it’s not an oxymoron!) and their V-logs from the event.

4. The Question of semantics? 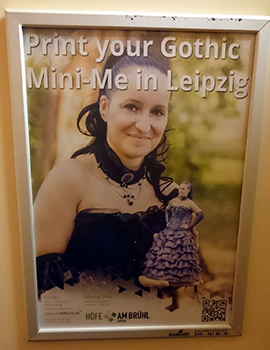 This year the WGT program was extended with one more attraction: The Victorian Village. The event will be held at very interesting location - in the building of Panometer, the equivalent to Vienna’s Gasometer, that in Leipzig functions as a Theater and great panoramic view point - hance the name (Panorama + Gasometer = Panometer). The Victorian Village is a new independent event and was organized by Children of Diana (one of them is Frau Viona Iegelms), and it is connected to a previous events known as Viona’s Victorian picnic, that used to be an event on the picnic, but not the picnic itself.
This caused some confusion as the traditional Victorian Picknick in Clara-Zetkin-Park is still happening, but at the end there were enough people who keep on coming, and on FB you can find this event under the name of Neoromantische Picknick, Das Viktorianische Picknick etc. The Victorian Village in Panometer, was also not a Village as it also functions as a market, hosts dance lessons, a tea party and the rest of the high class activities. Now the question would be, as on continental Europe to call it Belle Époque instead of Victorian. But again, maybe it just the question of semantics that goes in the same perspective as the problematic about Pagan village as a goth event (c WGT report 2013) 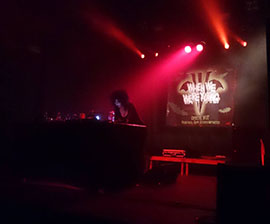 Just first day was: Kirlian Camera @Kuppelhalle vs Deine Lakaien @ Agra vs Nosferatu @Felsenkeller  vs Grendel @ Kohlrabizirkus…
Second day: Fields Of The Nephilim vs  Agent Side Grinder  vs DAF vs Moonspell …
Third day ….
You will never make it: time vs place – and as more as you have opulent taste in Goth music (and this is an oxymoron!) it is getting harder to make a decision. Because of this, the experienced WGT visitor often ignores the physical reality in favour of the ideas that animate it. And then, if you are WGT veteran, off program becomes the main one and enjoyment increases.


2015 was a year that started with pro&con protest wave around PeGida in Germany with Dresden as a canter. Despite rumours and events including the actual political situation, WGT 2015 remained a very peaceful event without any sort of incident in this direction.  Famous left(y) Urban area of (Sozialer Brennpunkt)  Connewitz was not a part of the WGT mainstream publicum due to lack of venue this year as well as in 2014 (more about it in txt 2014).  Werk II was home of the 10 year anniversary of the Gothic Pogo Festival.


Alexander Nym´s lecture named „Goth and its 1000 faces” at Kulturhafen Riverboat , was a very interesting public reading from his books. Nym is a WGT ethnologist and author of comprehensively documented book on the 20th anniversary of the WGT - "Black Celebration", as well as “Schillerndes Dunkel". 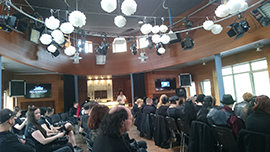 He was presenting a new book about the British Industrial heroes Test Dept: Total State Machine. However the more interesting was a report on Wave Gothic Treffen. At first there was one excessive story from The Fair Sex Band, where one could hear Nym´s commitments on the Scene and its interpretation. In his second reading, he was reminiscing beginning year of WGT, with dazzling descriptions of scenes from the camp and Werk II. Following was an open discussion, so I took my chance to asked him to comment on the Werk II and WGT today, and underlined that as he knows “it’s a money issue, nothing more”.
Nevertheless I have to ask myself - how could have Gothic-Pogo Festival afford it and WGT not?


Apocalyptic rave that was playing some missing noise at WGT was held in very interesting location Institut fuer Zukunft under the name HANGDOG + SABBAT.